The Art of Filipino Food

There are certain countries widely recognised for their cuisine.

France, Italy, Japan, and Thailand quickly come to mind.
But The Philippines is seldom mentioned in the same breath, and rarely is its food recognised in terms of culinary greatness. But that possibly says more about the Filipino’s sense of modesty than the food itself, because make no mistake, Filipinos are as passionate, as creative, and as artistic in their cooking than anyone else. In fact, in their way, possibly far more so.
You only have to eat with a Filipino to realise this.

Conversation ends as the serious business of eating begins. The spoon (many Westerners are surprised to find

that Filipinos do not use chopsticks, but prefer a spoon and fork, or sometimes even their fingers) becomes the artist’s palete upon which each mouthful is carefully constructed.


Even a dish as everyday as tapsilog; the egg is chopped into the rice, the tapa is carefully separated, and then a measure of each is assembled in the spoon, proportioned according to its contribution to the overall flavour. 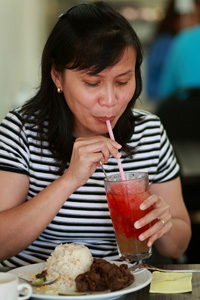 Theres also the harvesting approach  piles of rice assembled neatly on the plate, each then is adorned with a piece of egg, and topped with a piece of beef. When every pile is complete, it’s harvesting time, one prefabricated scoop at a time.

Compare that to the average Westerner’s approach

– a piece of tapa on its own, followed by a chunk of egg on its own, chased by a forkful of rice on its own – and you begin to understand why Westerners often simply don’t seem to “get” Filipino cuisine. They like Thai, Chinese, Italian; because the ingredients are pre-combined and the eating is effortless.

But the joy of Filipino food is that eating becomes part of the creative process. The diner is a participant in the creation of his or her own culinary experience, and the rewards, as a result are that much greater

Look at singiang or tinola.

Add to the mix patis, or soy and lemon, and the taste can be even more customised.

That’s the genius of Filipino cuisine. Food – and eating it – is a pastime, a passion, even a form of individuality and self expression. Those from other cultures who, finally, grasp the idea are inevitably delighted by the world of possibilities, and the magnificent range of flavours, suddenly available to them.


Humble they may be, but Filipinos have elevated the simple act of eating … to an art.